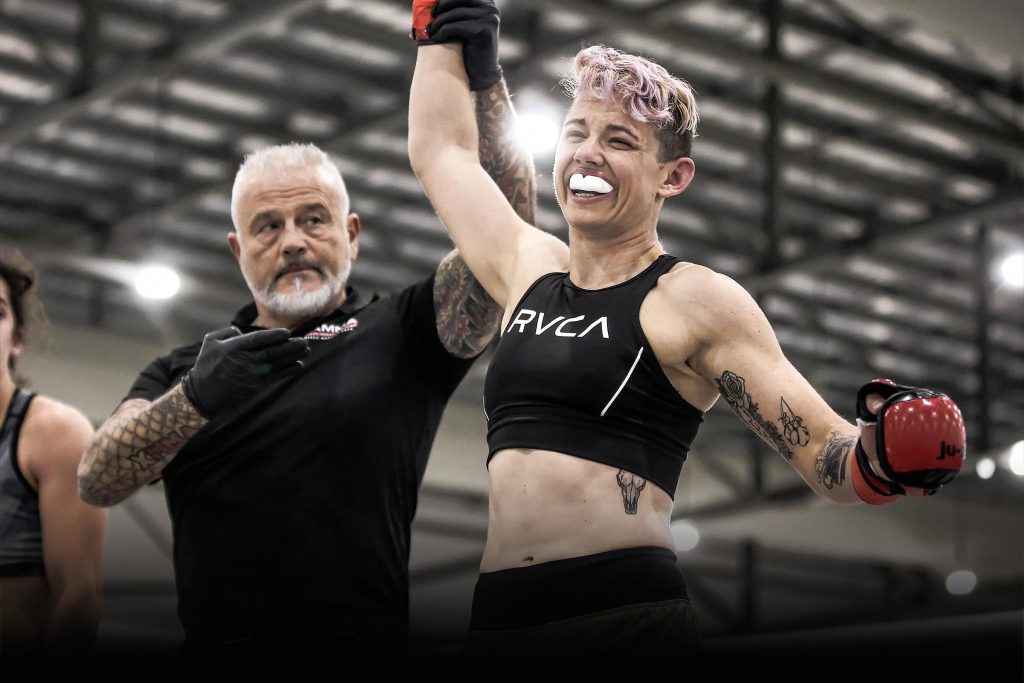 When Australia’s Courtney Martin first stepped foot in the ring for the 2019 GAMMA World Championship on 18 November 2019, she never expected to leave a couple of days later as her nation’s first-ever female amateur mixed martial arts World Champion.

Not only did Martin secure the gold medal, but she also earned the event’s Best Female Athlete accolade, a US$100,000 contract with ONE Championship, and a one-year training scholarship at Asia’s premier championship brand for martial arts, Evolve MMA.

Eighteen months after her historic triumph, the Perth native is raring to make her professional debut after the global pandemic threw a spanner to her plans.

In this exclusive interview before her bout on April 28th, the mixed martial arts athlete and her coach, Stephen Walton, share memories from Martin’s experience at the world-class competition, provide some tips for aspiring mixed martial artists, and more.

GAMMA: Courtney, what made you decide to participate in the 2019 GAMMA World Championship?

Courtney Martin: A friend of mine first gave me a heads-up about GAMMA. The more my coach and I looked into it, the more obvious it became of how big an opportunity it would be – to be able to test my abilities on an international stage and see how I compared to other amateurs. It was too good to turn down.

GAMMA: Describe your experience at GAMMA. What were some of the things that impressed you most during the six-day event?

CM: The tournament was very well-organised. The weigh-ins ran quickly each morning, allowing fighters to fuel up well before the events. The fights ran on time, with competitors getting enough warning to warm up beforehand. Having a running scorecard for spectators and corners to see was handy as well.

GAMMA: You finished two of your opponents via submission to book a ticket to the final round in the women’s 60-kilogram division. When did you believe you had a real chance to secure the gold medal?

CM: Not until the end of the second round of my third and final fight did I even think there was a possibility I could win it.

GAMMA: You defeated LaNeisha Vinson in the final match via decision. What was running through your mind during that bout?

CM: I was feeling nervous but confident when entering the ring. I knew it would be a war and I wanted nothing less. I was just focused on surviving in the first round because I didn’t think I had enough in me to win it. But then, my stubbornness kicked in and I refused to give up.

GAMMA: How did it feel when you realized you were a GAMMA World Champion?

CM: I was blown away, completely stoked. To not only win but also in the way I did – I was just astonished I’d been able to find that fight inside myself to push through the adversity and take the gold.

GAMMA: Stephen, were you expecting Courtney to win the gold medal at GAMMA, or were you more focused on giving her a bigger stage to expose herself?

Stephen Walton: I was very confident in Courtney’s ability and was so excited to watch her be tested against some of the best female fighters from around the world. She trained hard and was prepared. So, I knew if she was focused and fought to her game plan, she could compete with all levels of fighters. I wasn’t surprised when she won the division.

GAMMA: In your opinion, what are her biggest strengths?

SW: Courtney’s main strengths are her passion for learning and her dedication to the sport she’s chosen to follow as a career. Our goal is for her to be a complete fighter in all aspects of MMA. She has made massive improvements in her striking game and is very strong in her ground game, finishing most of her opponents there. She is a true fighter and I’m excited to see her improvements shown in each fight.

GAMMA: Courtney, what is your career objective for now?

CM: To be the best fighter I can potentially be. I want to push myself to my limits and fight the best in the business.

GAMMA: What is your vision for women’s MMA in 10 years?

CM: I can see the female divisions becoming even more competitive and opening up more weight classes. I am excited to be a part of it.

GAMMA: Now that you are turning pro, what are some of the most important skills a young amateur mixed martial artist should develop?

CM: Conditioning, although the adrenaline dump is hard to reproduce in training. At least having a decent gas tank is second best. Preparing as much as possible mentally, and visualisation and breathing work are big benefits when it comes to helping with nerves and recovery. And a good base knowledge of all MMA aspects – being confident wherever the fight goes is a great benefit.

GAMMA: Lastly, Stephen, you have coached Courtney and other mixed martial artists. What are the technical and mental aspects that amateurs need to acquire in order to step up to the professional level?

SW: Getting the ring or cage experience as an amateur is paramount for them to start competing at their best. A lot of amateurs don’t place enough emphasis on mental training and only smash out the physical training. I believe this can often be the difference between having a good or poor performance in combat sports.